A Deep Dive into Email Server Security and Must-have Policies

No doubts, Email is important tool for every business. It is used heavily for internal communication between employees and also externally towards other companies and consumers depending on the business type. In its basic form, It is a very powerful tool that asynchronously or indirectly carries your message to the recipient and allow him to respond later at his convenient.

Due to weaknesses in email transport layer, which have been revealed through the years since its first use, attackers have been using emails as the number one entry point for many different types of attack such as phishing, malware, business email compromise - BEC, and ransomware.

According to Blackhat survey 2017, phishing was number one security threat that concern the most. Second was the directed attack such as spear phishing. Ransomware was rank five. It is interesting that the entry point for the three of them is email system. So, what is the business impact? Well, FBI reported last year (2017) $5.3B damage only from business email compromise - BEC.

It is clearly crucial for business entities to secure their email system and accordingly their users and business against this kind of damage. 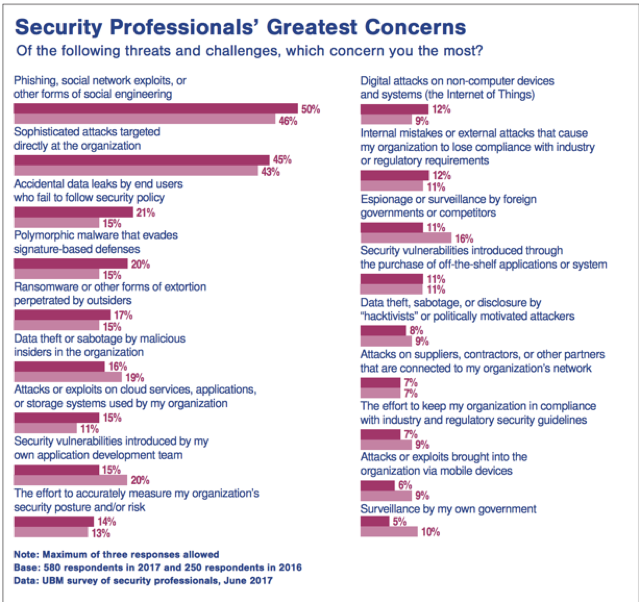 You can simply contact us for helping in auditing/securing your system or else to continue reading.

There are three key areas that need to be covered to avoid challenges that come along with email system utilization.

End-user Awareness is one of the pillars required for mitigating security challenges that comes along with email usage. On brief, businesses must consider enrolling their end-user into several awareness programs about email use and challenges arising from end-user mis-use.

Hold you gears on as in the following lines, we are going to deep dive into the other two areas. 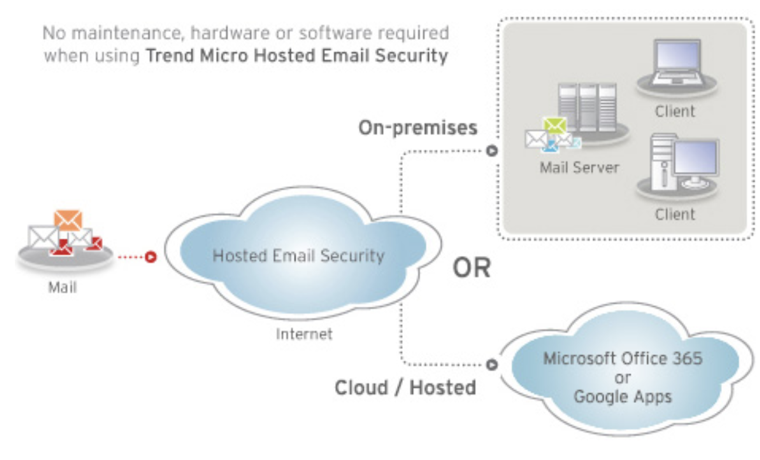 In this architecture, you design your email systems in such a way of having two servers one internal for local users and second one (email gateway) will be in charge about communicating with the outside world. This design allows you to mitigate and isolate incoming threat prior even entering your local network and assign this task to your external email gateway. On the other hand, you should enforce other policies on the internal email server to secure lateral and outgoing communication. This technique can be achieved in either cases of having an on-premises email server or if it is hosted on the cloud.

One of the commercial solution available is Trend Micro Hosted Email Security, which can be positioned as an external gateway. Schematic diagram hereafter shows the way it operates. HES offers flexible email policy configuration and also an exterior tier that mitigate lots of threat prior entering your domain.

Here we are going into the anatomy of different policies required to secure your email systems and accordingly your end-user and business. It is classified into two main groups, which are: -

Those policies are published by the sending domain end interestingly via another service namely domain name service or DNS for short. It is a best practice that those policies are getting verified and validated from the receiving end; however, many email-servers have poorly configured to overlook or ignore those best-practices. Generally speaking, email-servers are playing the two rules of sending and receiving emails, accordingly, System Admin personnel should consider publishing their Sender Domain Based Policies (send role) and also to verify and validate other domains policies (receive role). Hereafter we are going to discuss those policies and its benefits in enhancing server performance and mitigating many security threats such as Spamming, Spoofing, and Malware.

Considering above policies eliminates tremendous amount of scavenger emails. It protect your network against attackers trying to compromise your network or users via ransomware, sextortion, phishing, or malware. Having the fact that one of the ways an attacker could penetrate your network is by spoofing your email server either by impersonating your domain or other trusted domains. So, end-user awareness is pivotal in your mitigation endeavor.

Finally, here are some guidelines when you apply those policies.